A common argument routinely circulated by proponents of medical malpractice “reform” is that if we make it more difficult for patients to sue negligent doctors, the overall cost of health care will drop.  The argument goes that physicians, averse to being sued, order large numbers of redundant and unnecessary tests and procedures to protect themselves from frivolous lawsuits.  This is commonly referred to as “defensive medicine.”  Tort reform advocates claim that by putting caps on damage awards, victims of medical negligence will be less inclined to file lawsuits, insurance companies will save money, malpractice premiums for physicians will decrease, doctors will cease to practice defensive medicine and health care costs will suddenly drop.

The data reveals that this theory – a linchpin of “tort reform” advocacy – boils down to little more than an unfounded collection of unsupported inferences.  How do we know this?  First, by looking at areas where medical malpractice reforms have been implemented and noting how little things have changed.  For instance, Texas is a model medical malpractice “reform” state that enacted legislation in 2003 which, among other things, capped non-economic medical malpractice damages at $250,000.00.  Some politicians have cited Texas’ reforms as “successful,” but the success of this legislation certainly cannot be measured by its effect in controlling health care costs.  Consider the chart below, which compares Medicare reimbursement trends between Texas and the nation as a whole during the years 2000-2007. 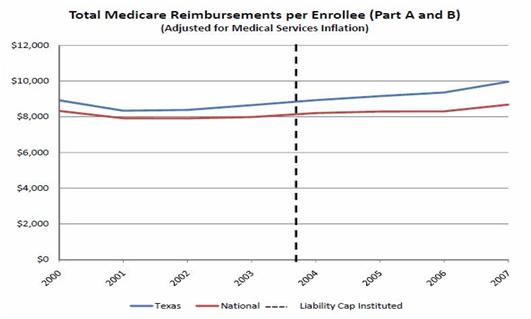 Not only has per person Medicare spending in Texas continued to exceed the national average, the data also show that such spending rose at nearly twice the national average (15.1% versus 8.7%) in the four years since the medical liability reform legislation was passed.  Furthermore, before such “cost-saving” legislation went into effect, per person Medicare reimbursement rates in Texas were the tenth highest in the nation.  In 2007, reimbursement rates in Texas had risen to the second highest.  None of this is resounding evidence that tort reform has been successful in controlling health care costs.

Another test of the impact that medical liability reform has on health care costs is to compare regions with both high and low malpractice premiums.  In the September 2010, the Journal of Health Affairs did just that, and found that while tort reform may result in as much as a 10% decrease in malpractice premiums, such savings have translated into total health-care spending reductions for consumers of around 0.1% – a mere sliver of the total health care spending pie.

In reality, since the passage of Medical Liability Reform, Texas has fallen behind in virtually every measure used to evaluate the quality of health care – be it cost, access, or the number who go without health insurance.  Spending increases for diagnostic testing have exceeded the national average, Texas’ uninsured rate has increased, the cost of health insurance has more than doubled, and growth in the number of doctors per capita has slowed.  The only measurable improvement in Texas since 2003 has been a decline in physician liability premiums. But payments by liability insurers on behalf of physicians have fallen far more than the premiums, suggesting that insurance companies have simply pocketed most of the savings.

None of this is meant to say that these unsettling trends are a consequence of medical liability reform.  Clearly, though, the political justifications offered in support of such legislation have not come to pass.  Insurance companies and, to a lesser extent, doctors, have seen some savings. But sheltering doctors from lawsuits has proven to have absolutely zero effect on reducing overall health care costs for consumers.