Fentanyl is an opioid pain medication that is 100 times more powerful than morphine. It is used to treat patients suffering from moderate to severe chronic pain. The patch is most often prescribed for people with cancer or severe long-term injury. The fentanyl transdermal patch was approved by the Food & Drug Administration (FDA) in 1990 for people with persistent to moderate severe pain.

The Sandoz fentanyl patch is manufactured by Johnson & Johnson subsidiary Alza Corporation. Sandoz is a transdermal patch, which contains a three-day dose of fentanyl gel that is sealed in a reservoir and released at a steady rate over 72 hours. The FDA has received hundreds of reports of fatalities linked to Sandoz fentanyl patch use. The cause of these deaths can be due to seal breaches, which allow fentanyl gel to leak from the patch, known as the “fold-over defect.” Deaths may also be a result of malfunction of the rate control membrane or other defects.

Patients and caregivers who come in contact with a leaking patch may experience severe side effects or potentially be victims of a fatal overdose. In addition to reports of leaking patches, the FDA has investigated deaths and life-threatening side effects in patients who never should have been prescribed the patch. 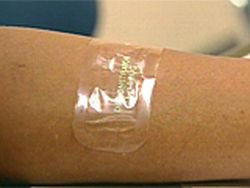 In December 2007, reports of improper prescribing of the patch prompted the FDA to issue its second Public Health Advisory regarding fentanyl pain patches, which stated, “reports indicate that doctors have inappropriately prescribed the fentanyl patch to patients for acute pain following surgery, for headaches, occasional or mild pain, and other indications for which a fentanyl patch should not be prescribed.”

The FDA’s warning to doctors and patients on the symptoms of fentanyl overdose included the following:

According to the FDA, patients using the fentanyl patch who experience those symptoms should get medical attention right away. Additionally, patients or caregivers should call the patient’s doctor immediately if the patient’s temperature exceeds 102 degrees while wearing a fentanyl patch.

On November 17, 2008, HO&P achieved a $16,560,000 verdict for the family of a Cicero, Illinois woman who died while wearing a Duragesic fentanyl transdermal pain patch. On February 15, 2004, 38-year-old Janice DiCosolo died as a result of using a defective Duragesic patch that her doctor had prescribed to alleviate the intense pain she experienced from a neurological condition called “reflex sympathetic dystrophy.” After a three-week trial, a Chicago jury found two Johnson & Johnson subsidiaries liable for the death of Mrs. DiCosolo, a mother of three.

If you or a loved one has suffered injury, or a family member has died as a result of using any brand of fentanyl transdermal pain patch, please contact us for a free consultation.

On February 12th, 2008, all 25-microgram-per-hour patches that expire on or before December, 2009 sold in the U.S. were recalled by Johnson & Johnson. The recall includes Duragesic and Sandoz brands, both of which are manufactured by the Johnson & Johnson subsidiary Alza Corporation. This recall follows a 2004 recall of five lots of 75-microgram-per-hour patches for leaking defects. Many other lots, of all sizes, suffered from leak defects as well but were not recalled.