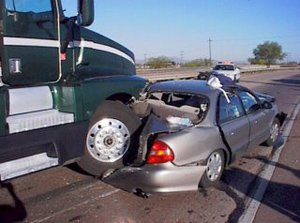 The United States government limits how many hours and miles a truck driver can drive his 18 wheeler each day and each week.   These limits were created because of the extensive history and studies that show the problems that fatigue can have on drivers, especially drivers of 18 wheel vehicles.

One study recently showed that after only 80 minutes on the road, a truck driver’s ability to drive and operate his truck safely diminishes greatly.   And unfortunately, crashes caused by fatigue are often more serious and cause much greater damage and injury because the truck driver’s reaction times are delayed and they are unable to make any maneuvers to avoid the crash – which they may have been able to do if they had not been so tired.

The National Transportation Safety Board (NTSB) conducted a series of studies and found that almost half of all crashes involving heavy trucks were related to fatigue.  In over 17% of the cases studied, the truck driver admitted to having simply fallen asleep at the wheel.

Because fatigue and overdriving are such serious concerns, the United States government requires truck drivers to maintain a driver log book that tracks every minute they are driving or on duty.  They are required to turn in a copy of such log books to their company at the end of every week.  These trucking companies, if they are properly checking these log books to insure that their drivers are driving safely, should compare these log books with (a) the numbers of miles a truck driver drove each day (i.e. “Is it even possible to drive as many miles in the time frame the driver says he was driving?”); (2) the gas receipts, toll road receipts, and weigh station receipts (i.e. “Was the truck driver actually driving where he said he was driving in the log books?”) and (c) satellite tracking information (nowadays each truck typically has a satellite tracking system where the company can track where a truck is at any moment) (i.e. “Does the satellite say the truck was where the driver’s log books say he was?”).

A driver’s log books were designed to insure that a professional truck driver does not drive more than the allowable amount of hours each day and insure that we do not have tired and fatigued drivers on America’s roadways behind the wheels of a vehicle weighing over 100,000 pounds.  With today’s technology, a trucking company can easily verify if a trucker’s log books are accurate.