For decades, manufacturers of asbestos materials knew that exposure to their products could cause deadly illnesses, but chose to do nothing. Now years later, thousands of individuals are being diagnosed every year with mesothelioma cancer or other illnesses that were caused by exposure to asbestos that occurred on the job, during military service, or in the home.

Although many individuals who have been diagnosed with mesothelioma cancer were exposed to asbestos materials in the workplace for many years, it is possible to develop the disease from as little as one incidence of exposure. In spite of this, mesothelioma cancer is very slow to develop, often taking decades between the time of exposure to asbestos and the first symptoms of the disease.

The symptoms of mesothelioma differ depending on which part of the body—the lungs, abdomen, or heart—is affected. Some of the most common mesothelioma symptoms include chest pain, shortness of breath, persistent cough or other breathing problems, weight loss, fever, and other indicators of problems with the lungs, heart, or stomach.

Patients who develop potential symptoms of mesothelioma may be ordered to undergo asbestos testing by their doctor. These tests can include a biopsy to look for cancer cells inside the body or a pleural examination to assess the function of the lungs. Although new treatments are being developed every day to help patients who receive a mesothelioma diagnosis, because of the advanced stage at which the disease is usually diagnosed, it is almost always fatal.

Other Diseases Linked to Asbestos

Exposure to asbestos has been linked to a number of other serious illnesses besides mesothelioma.

Asbestosis is a chronic disease caused by scarring in the lungs due to the presence of asbestos fibers. Although asbestosis is non-cancerous, nonetheless it is a serious illness that can cause severe breathing problems, cardiac failure, and death. Symptoms of asbestosis include shortness of breath and rales, a dry crackling sound in the lungs when inhaling. Asbestosis is usually detected by a pulmonary examination, which can assess a patient’s breathing function and help to chart the progression of the disease.

Individuals who have been exposed to asbestos may also face an increased risk of developing lung cancer. Common lung cancer symptoms include shortness of breath, chest pain, and persistent breathing problems.

Because asbestos products were commonly used for decades in a variety of industrial and commercial fields, workers at a large variety of jobsites have been affected by mesothelioma and other asbestos diseases, including chemical plants, oil refineries, power plans, shipyards, train or railroad depots, mining operations, and many other work sites. 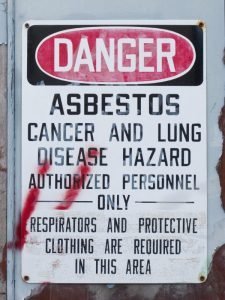 U.S. Navy veterans have also seen a high number of deaths due to mesothelioma, asbestosis, and other asbestos diseases. For decades, the U.S. Navy used insulation and other mechanical parts with asbestos on ships. Workers at naval shipyards were also at risk from handling supplies and packing materials that were contaminated with asbestos. Navy veterans who worked with asbestos during their military service decades ago are only learning about the dangers to which they were exposed after they have begun to show symptoms of a serious disease.

Lawsuits Filed by Victims of Mesothelioma and Asbestos

More than 500,000 workers and other individuals who have developed mesothelioma or other asbestos illnesses have filed lawsuits against manufacturers of asbestos products or the companies who used them. Documents that were uncovered in these lawsuits have proven that the asbestos industry has known for decades about the deadly risks of asbestos exposure, but failed to warn workers or the general public about these dangers.

Although the link between asbestos and illnesses such as mesothelioma is clear, identifying the cause of your asbestos exposure can be a difficult and time-consuming task, requiring a detailed work history and careful gathering of evidence to prove the link between your illness and asbestos. Workers who have been diagnosed with an asbestos-related disease should work with an experienced attorney, who can guide them through the process of filing a lawsuit and seeking compensation to cover medical bills and other expenses.

The lawyers at Heygood, Orr & Pearson have acquired decades of experience taking on some of the largest corporations in the U.S. and worldwide. Our attorneys have handled hundreds of personal injury cases on behalf of our clients, achieving verdicts and settlements totaling more than $200 million on their behalf.

In many of these cases, our law firm has invested hundreds of thousands of dollars on our clients’ behalf in order to take their cases to trial and achieve the best possible result in their case. At Heygood, Orr & Pearson, we are committed to achieving justice for our clients, whatever the cost.

If you or a loved one have been diagnosed with mesothelioma, asbestosis, or other illnesses caused by exposure to asbestos, you have legal rights. Contact the lawyers at Heygood, Orr & Pearson for a free consultation about your case by calling toll-free at 1-877-446-9001 or by following the link to our free case evaluation form located on this website.