PRADAXA is a prescription blood-thinning drug made by Boehringer Ingelheim. It was approved by the FDA in October of 2010 to reduce the risk of stroke and blood clots in people with atrial fibrillation. Since its approval, the drug has been linked to serious and life-threatening bleeding risks.

Why Take a Blood Thinner?

With Warfarin (Coumadin), about 1 in every 33 patients will suffer a major bleed.[1] While the risk of such a bleed is high, the treatment for a Warfarin-induced bleed is very effective. Should a major bleed occur, oral or parenteral vitamin K1 can be given which reverses the anti coagulation effects of the Warfarin (Coumadin). This is referred to as a reversal agent, and the Full Prescribing Information (i.e., package insert) for Warfarin provides very specific instructions on how to use oral parenteral vitamin K1 to reverse a bleed.[2] Also, the package insert for Wafarin very prominently warns about the risk of bleeding associated with its use.  In fact, the very first words of the package insert in all caps and bold type are: “WARNING: BLEEDING RISK”. 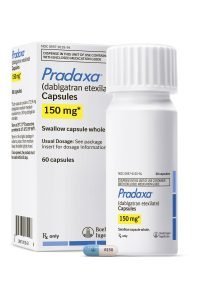 Warfarin works by inhibiting vitamin K-dependent coagulation factors. This is why giving vitamin K1 reverses Warfarin related bleeds. PRADAXA, on the other hand, produces anti coagulation through a different mechanism by directly inhibiting thrombin. Although Boehringer Ingelheim claims in their package that PRADAXA causes no greater risk of bleeds than Warfarin, the FDA issued a “Drug Safety Communication” on December 7, 2011 stating that the “FDA is evaluating post-marketing reports of serious bleeding events in patients taking Pradaxa.”  The FDA’s counterparts in Australian and Europe issued similar alerts.[3] Boehringer Ingelheim has even admitted to at least 260 confirmed fatal bleeding events in patients taking Pradaxa. Furthermore, the Institute for Safe Medication Practices has reported that in the first quarter of 2011, PRADAXA produced two different kinds of signals of major drug risk: a large volume of total serious reports, and large numbers of reports for a specific adverse event, hemorrhage.  They found that 932 serious adverse drug events have been reported where PRADAXA was the primary suspect drug.

Because of the large number of significant adverse events, serious questions have emerged about Boehringer Ingelheim’s claims that PRADAXA does not involve any greater risk of bleeding.  In addition, it is undisputed that PRADAXA, unlike Warfarin (Coumadin), does not have a reversal agent that can be administered should a bleed occur.  Some treatments for a PRADAXA bleed are being evaluated (for example fresh frozen plasma and prothrombin complex concentrate), but the effectiveness and speed of these treatments are uncertain.[1]

In light of the serious risk of life-threatening bleeds associated with PRADAXA and the lack of any established effective antidote, what did the Boehringer Ingelheim initial package insert for PRADAXA tell physicians?  What did their PRADAXA marketing brochures tell physicians?  NO WARNING!  Neither of these PRADAXA communications to physicians contained a warning about the fact that their patients could experience a life threatening bleed and there may be nothing the physician can do to effectively save their lives. Although a warning about the lack of a reversal agent has since been added to the PRADAXA package insert, it does not appear until the 5th page of the package insert.  Clearly, a black box warning should be added to the package insert of PRADAXA warning about the high risk of life threatening bleeds and no reversal agent and that no effective treatment for stopping the bleed has been established.